How it all began…

In 1904 one man left home and set out on a journey that was to change the course of English literature forever. That man was Leopold Bloom and the resulting tale, as told by James Joyce, has become the most important, imaginative masterpiece of the English language.

In 1993, Sean Walsh, the film’s director began another journey: an Odyssey that would result in a new feature film of the world’s greatest comic masterpiece.

Sean’s purpose was clear: to bring Joyce’s novel to a much wider audience – to show people what happens within the hidden pages of Ulysses – to reveal the humour of Joyce and the utter humanity contained in the novel and to sketch some of the literary tricks and techniques employed by Joyce.

In 2004, the year that marked the 100th anniversary of “Bloomsday”, that dream became a reality, for “Bloom” was completed and was released around the world.

On the morning of the 16th June, 1904, Leopold Bloom set out on a journey that was to become one of the greatest tales of the 20th century. Starring Academy Award ® Nominee, Stephen Rea, IFTA Award Winner, Angeline Ball, Hugh O’Conor and Patrick Bergin, “Bloom” is an enthralling story of love, loss and lust – a fantastical adventure into the imaginations and desires of Stephen Dedalus, Leopold Bloom and Molly Bloom. 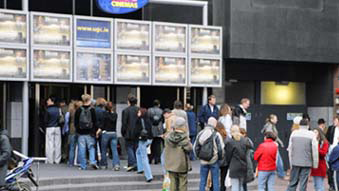 June 16th, 2004 marked the centenary of Bloomsday and as part of the celebrations, “Bloom” was screened in New York, Philadelphia, Chicago, Boston, Sarasota, Utah, Ottawa, Rome, Florence, Paris, Zurich and Kuala Lumper.
The film was also re-released into cinemas in Ireland and was screened at the International James Joyce Symposium in Dublin.